From challenging traditional gender roles, to identifying as a different gender, to refusing to identify with any gender at all, the term gender independent or gender non-conforming covers “a range of possible expressions and experiences” (Pyne, 2014, p.1). While these groups share some struggles, it is important that they also be clearly distinguished as it can be extremely hurtful to assume that a child identifies with one category when they belong to another. The following list of picture books, targeted to preschool and early elementary aged readers, addresses a relatively narrow field: Boys who are gender non-conforming, but who identify as being boys. While the terms gender independent and gender non-conforming encompass a variety of experiences, they will be used to address the stated theme for lack of a more specific term.

Finding picture books about boys who don’t do stereotypical “boy stuff” is difficult, to say the least. Girl power is all the rage and finding a book about a girl who can go hiking wearing her patent leather shoes (so impractical!) or princesses who pursue a variety of activities wearing sparkly crowns is not a difficult endeavour. This is a good thing, but boys continue to have their wardrobes and activities largely circumscribed by social expectation. Fortunately, this is increasingly being recognised as a problem and picture and illustrated books are slowly being released that address the issue. Some of the titles are good, others not so much. Due to the limited selection, even many of the “good” titles have serious problems. Other than the disturbingly common use of the word “sissy,” the two main issues are the binary representation of gender norms and the obligatory discussion of social exclusion and derision.

It is ironic that so many stories that address gender non-conforming boys end up reinforcing binary gender roles. Many books about gender independent boys show them strictly adhering to stereotypical girl activities and interests. One of the major trademarks of this phenomenon is a gender non-conforming boy who dislikes sports. This is not to say that there are not boys who like dressing up in pretty frocks who also dislike sports and rough play, simply that we seem to have a difficult time discussing boys who do not cleanly fit into one specific gender role. It would be sacrilegious to say that a girl can’t enjoy sports and wear a pretty dress to a party, yet that is exactly what we seem to be telling young boys even in some of our most progressive picture books. A diversity of gender expression is important.

A second trend that can be observed in most books that include a male character who doesn’t conform to standard gender behaviours is that they are written for the express purpose of talking about the issue. Everyday gender diversity is rarely seen in picture books [as an aside: a great levelled reader that does this quite well is “Pinky and Rex” by James Howe]. This means that these books end up being “issue” books where the primary tension is a boy’s atypical gender behaviour. This in turn leads to very few depictions of gender non-conforming boys who go about their daily business without being bullied. Books about bullying are extremely important as gender independent boys are at an increased risk of experiencing social exclusion and stigma; however, by only having books that depict exclusion, we are implying that this should be a natural expectation if one is gender non-conforming. It is important to have books that depict a spectrum of gender behaviour without judgement. A preschool aged boy with a flair for the fabulous should not be limited to stories that tell him that his wardrobe preferences will lead to teasing once he enters school.

It is easy to nit-pick these books; however, it must be recognised that they are trailblazers. They are starting important conversations with our children about societal expectations and how we as individuals react when those expectations are not met. The value of this cannot be overstated.

Morris Micklewhite and the Tangerine Dress

Morris is a boy who has fallen in love with a tangerine dress (accompanied by a pair of shoes that have a satisfying click) from his class’ dress-up centre. The colour reminds him of his mother’s hair and he loves the sounds that it makes when he walks. The other children don’t understand and make fun of him, which makes him feel sad and sick to his stomach.

Both the language and art in this book are lovely, evocative, and just a little magical. The alliteration of names in Morris’ family is a nice touch and the recurrence of onomatopoeia throughout helps to provide a framework for the story. The tangerine colour that Malenfant chose for the illustrations is truly lovely, leaving the reader in no doubt why Morris loves it so. The expressiveness of his face adds an additional layer of emotion to the story.

This book is somewhat unusual in that the focus is on a specific gender non-conforming behaviour, rather than specifically on the child’s identity. It’s not that Morris loves dresses in general or prefers to play only with girls, he just really loves that tangerine dress and the accompanying clicky shoes (although he is also not averse to his mother painting his nails pink). This subtly moves the discussion away from “boys who act like (traditional) girls” or “boys who don’t act like (traditional) boys” to being yourself, whatever that looks like. The ultimate lesson is that one’s interests and identity need not be prescribed by one’s dress up attire. 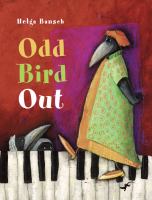 This is a great book about being true to yourself. Robert is a young raven who is not like the other ravens. He is unapologetically exuberant and flamboyant. He likes singing, dancing, and telling stupid jokes. Meanwhile, “proper” ravens wear black, act decorously at all times, and only listen to classical music. One day, the other ravens have had enough and they kick Robert out of the flock. What happens next proves that we all need a little colour in our lives and that there is no better person to be than yourself.

“Odd Bird Out” can be considered on a number of levels. At its most basic it is about not letting peer pressure dictate how you act, but there are deeper messages to be found here about gender roles and identity. Although wardrobe is not explicitly mentioned (other than to say that proper ravens only wear black) many of Robert’s costumes involve colourful dresses and high heels, highlighting a gender non-conformity message without belabouring it. Supported by its unique and colourful art style, the narrative contains far less exposition than many stories of its ilk and the main character is happily defiant, unconcerned with what his peers think. This book is a refreshing change from the usual narratives in children’s books about gender. The sly twist at the end makes the story even more enjoyable. 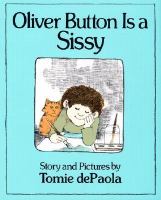 Oliver Button is a Sissy

Oliver Button isn’t like the other boys. He likes to skip rope, dress up, read, and play with paper dolls. He doesn’t like sports and isn’t any good at them. Oliver’s father and male peers disapprove of his sissy ways, while his mother tells him that he must get some form of exercise if he will not play sports. It is decided that he will take tap dancing lessons. While his father is somewhat mollified, the other boys ramp up their bullying. Oliver is not to be deterred, however, and decides to sign up for a local talent contest. Will he win? What will his peers think?

Something that sets this book a little apart from others of its ilk is that it is not only about a boy who does not adhere to traditional gender roles, but also about practicing and trying one’s best. It also mostly avoids the common theme of “odd child turns out useful and is thus accepted by his peers”, which is nice. There is an element of this, as his peers obligingly develop a new appreciation for him after seeing his performance, but it is not as overt as in many children’s stories. The story is slightly longer than most picture books, so is most suitable for an older audience. The illustrations are somewhat dated (not that this matters to most children), but have a nice balance of detail. The pictures are not too busy, drawing attention to Oliver’s facial expressions and keeping the focus squarely on the story as written. 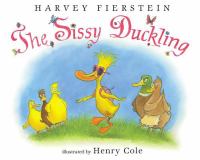 Elmer is a happy, go-lucky young duck. He enjoys creative and crafty endeavours, but detests sports. His mother is supportive and recognises him for the wonderful little duck that he is, but his father and classmates feel differently. He is bullied and eventually decides that he will not be accompanying the other ducks when they migrate south. He runs away and uses his crafty skills to make a cozy home in the woods. When his flock is attacked by hunters just as they begin their migration, Elmer is given an opportunity to prove his abilities and worth.

This is a picture book most suitable to older preschoolers. The book is somewhat text heavy and some of its content is intense (although never graphic). Elmer’s father calling his child a sissy and the hunting scene that includes “ducks [falling] like autumn leaves from the sky” may be distressing to more sensitive audience members.

While “The Sissy Duckling” opens the way for dialogue and discussion about gender roles and expected behaviour, it is also problematic. In fact, the story is rather reminiscent of Rudolph the Red Nosed Reindeer: A bullied and despised individual proves his usefulness and is thus accepted by his peers. The message presumably is that differences are good because they can come in handy. It would be far more powerful if the message was that being different is fine because we are all different in some way and, regardless, we all deserve to be true to ourselves.

Sadie Tucker is a student in the MLIS program at the University of British Columbia and a Library Assistant with the Vancouver Public Library.

One thought on “Picture Books about Gender Independent Boys – Part I”