You can find part I of Sadie’s book list here. 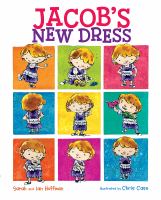 Jacob likes to wear dresses for dress-up, but he would really like to wear them to school as well. His classmate Christopher finds this upsetting and misses no opportunity to point out Jacob’s gender non-conforming outfits. With the support of his parents and his teacher, will Jacob follow his heart or give in to his peers’ judgement?

“Jacob’s New Dress” definitely has some shortcomings: The narrative and illustrations in this book are average; transitions between scenes are often abrupt, leaving the reader momentarily disoriented; the illustrations are expressive, but not particularly memorable; and the ending is a little too pat. Where the story shines, however, is characterization and emotionality. The adults are multidimensional (having mixed feelings about Jacob’s preferences) and the children’s play feels authentic.

The primary goal of this book is to address the issue of gender independent boys, which it does this very well. The story provides little details that emphasize Jacob’s diverse interests (e.g., playing on the monkey bars or playing “birds” in a homemade nest), he is not defined by his preference in clothing. The book is not only a resource for children but parents as well. The text provides gentle cues for how to deal with these types of issues (i.e., the “issue” does not always need to be directly addressed, just be supportive), while recognising that there will likely be some mixed emotions on the parents’ part.

This is a book with a message and it is none too subtle about it, but the unique topic and the delicate way that it is handled makes it an important story to share. 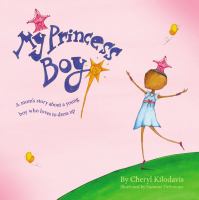 A mother describes her “Princess Boy” and recounts some of the challenges that they have faced. Princess Boy likes pink and loves to wear dresses and jewelry. When he is at home or with family and friends, he is supported. Things are more difficult when he leaves the safety of hearth and home: People laugh and stare, which makes him feel sad.

The text is comprised of simple, gentle prose. The narrator’s first person account brings a sense of immediacy and helps the reader to empathise with both Princess Boy and his mom. Despite the slightly creepy lack of faces, the illustrations evoke a sense of sweetness and largely feature Princess Boy dancing in various pretty dresses (accompanied by tiaras and wands). The book sports a decidedly pink colour scheme which helps to underscore the princessy theme. The cast of characters are racially diverse, which is a nice inclusive touch. Because there is no real story here, the book will likely have limited repeat value (even though it is a message that bears repeating). This is a rallying cry for support largely aimed at children who express their gender traditionally. It is a request for acceptance and inclusion. 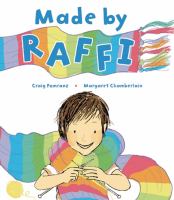 Raffi prefers to sit quietly at recess rather than to play energetic games. During one of these times, his teacher teaches him to knit. Raffi loves this new activity, so his parents take him to a wool shop where he decides to make his dad a rainbow scarf for his birthday. Shortly afterwards, his teacher announces that the class will be putting on a play in four days and Raffi decides that he must make a cape for the prince. Will he be able to make it in time? What will his classmates think?

This story is a gentle tale about a young boy following his passion. The illustrations are energetic and portray a diverse group of classmates. The story feels a little disjointed, with the transitions from knitted scarf to sewn cape feeling somewhat jarring. It is as if two stories are being forced into one narrative. The shift from knitting to sewing is also a leap, with the story seeming to believe that it is only natural that a young child who has been obsessed with knitting would easily be able to sew a cape.

This book would send a stronger message about gender non-conformity if it weren’t trying so hard. The awkward asides about Raffi feeling different due to his long hair and quiet demeanor actually take away from the message that it is OK to do non-traditional boy activities. This suggests that boys who like rough and tumble play cannot enjoy quiet, creative pastimes like knitting. Overall, this is a pleasant story that deals with its topic matter adequately but not masterfully. 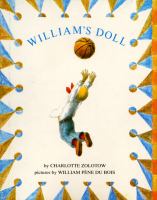 William wants a doll to cuddle and care for more than anything. His brother and brother’s friend call him names and William’s father keeps giving him toys that are not dolls. It is not until his grandmother comes to visit that William has a chance to have his heart’s true desire.

Repetition is used with a deft, light hand in this book, helping to provide a sense of rhythm and structure to the story. The prose is emotionally evocative; the narrator’s description of all the things that William wants to do with his dreamed of doll (rock it, cuddle it, play with it) brims with love and care. When William’s grandmother explains to his father why he should get his doll, these gentle sentiments are reinforced. The illustrations are fairly typical of the era and are not anything to write home about; they don’t really add anything to the story. They also do not start out on a good foot, as the first picture of William playing with his imaginary doll is confusing (it looks like he is cuddling his neck scarf).

The story has a wonderful, common sense message which is missing from most children’s books that address gender roles. William’s desire to care for a doll is not portrayed as girly, rather as a normal type of play that children of all genders should participate in in order to prepare them for potential adult responsibilities (i.e., parenthood). It also avoids the gender binary that is so often depicted. William enjoys playing with the traditional toys for boys, a basketball and a train set, that his father gives him.

“William’s Doll” is a solid, and comparatively subtle, picture book entry in the field of gender independent boys.

Sadie Tucker is a student in the MLIS program at the University of British Columbia and a Library Assistant with the Vancouver Public Library.