BCLA LGBTQ member Casey Stepaniuk brings us this great interview with Vancouver-based author Leigh Matthews. A big thank you to both Casey and Leigh!

A little while ago I talked with my friend and Vancouver-based author Leigh Matthews about her journey as a queer writer, her contemporary lesbian pulp series set in Vancouver, her must-have LGBTQ+ books, and what an LGBTQ+-friendly library looks like to her. Check out her website if you want to more information about her books and all the other cool stuff she does, including freelance medical writing and website development. I’ve reviewed her (awesome) books on my blog, if you want to check that out too. She had loads of interesting things to say, so here’s the interview! 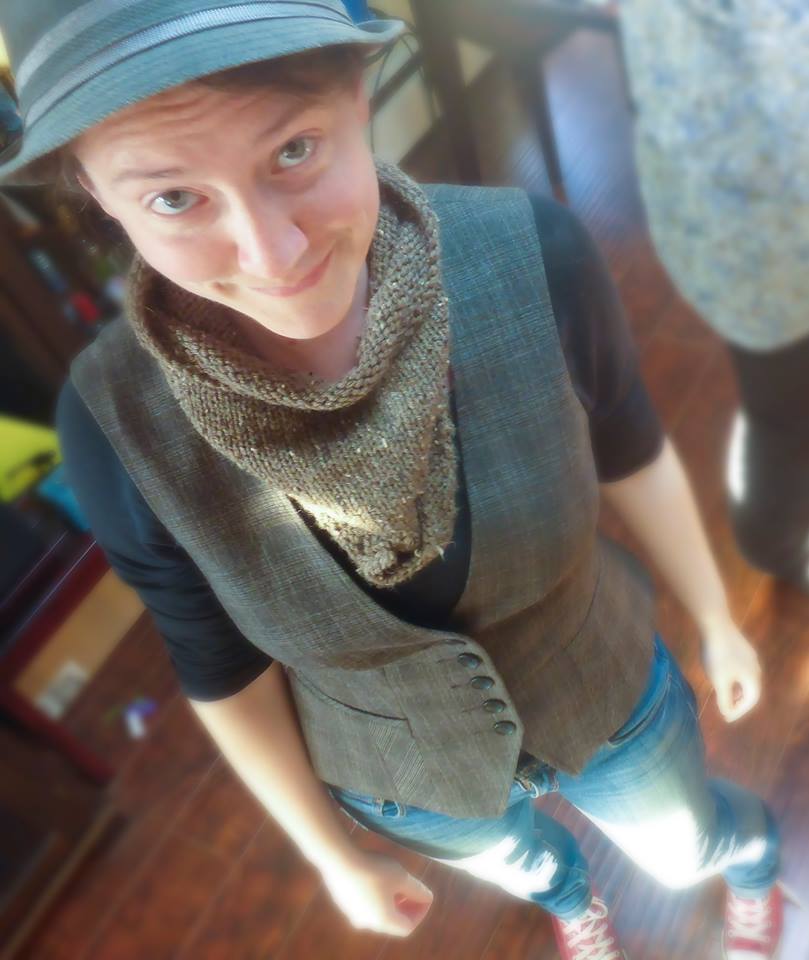 Can you tell us a bit about yourself and your career as a writer?

Aside from brief periods when I wanted to be a professional soccer player and a forensic pathologist, I always wanted to be a writer. I used to make up character profiles for the people who populated the childhood games I played with my brother. I would write stories about them, which then progressed into attempts at writing novels, peppered with a little poetry that was praised far too highly!

After being involved in a youth writing initiative in the UK in my late teens, I stopped writing for a little while, for a variety of reasons, including devaluing my creative nature. Then, when I moved to Canada in 2010 and started working as a freelancer, I made a commitment to myself to nurture that creativity and start writing fiction and poetry again. It took a while to clear out the creative pipes, and I found the challenge and boundaries of National Novel Writing Month very helpful in rediscovering the joy of writing with my inner editor turned off.

The novel that emerged from NaNoWriMo 2011 became The Old Arbutus Tree, my first full novel, published in 2012. I’ve tried to do NaNoWriMo every year since, and have also done the 3-Day Novel Challenge. These are such fun ways to just get the words down and get the story out. It’s so much easier to work with existing material than to stare at a blank page every day. And, seeing that word count ticking up every day is incredibly gratifying and has taught me to be less precious and more focused on pacing and plot as a scaffold for my work.

I’ve recently begun writing poetry again, but I mainly focus on novels and short stories, with some creative non-fiction. I am also a medical copywriter and journalist, which helps pay my bills and is a great way to learn new things and meet interesting people.

I’m really interested in people’s motivations – how others’ brains work and how they experience life. It’s such a privilege to work as a writer and have the time to get inside a character’s mind and create a realistic portrayal of someone who might think very differently to me. I think this is one of the reasons why readers have been found to have a higher degree of empathy than those who don’t read regularly. The ability to consider how someone else sees a situation and how they might respond to it is so important and yet we don’t teach it directly to children, we have to rely on literature to do that.

Do you think of yourself a “queer writer,” or as just a writer who happens to be queer?

I’ve identified as bisexual since I was a teenager, but only adopted a queer identity after moving to Canada. I feel like it’s a good fit for me in many ways, given my interest in shaking up standard forms of discourse and not just colouring outside the lines but questioning the very purpose and existence of those lines.

If you’re a queer, polyamory-inclined, vegan, feminist, immigrant, it’s all too easy for your accompanying bio to end up longer than the poem a journal wants to print. My queerness isn’t simply about my sexuality, though; for me, queer is more a verb than a noun, so it definitely influences my work as a writer.

For instance, I made a choice to self-publish my three novels (one of which is YA/NA) and one work of non-fiction. This was partly because I knew it would be difficult to get a contract with a good publisher, but also because I wanted to retain full creative control. I don’t like the idea of writing novel after novel that look exactly the same. Of course, self-publishing means I have to play the unfortunate game of respectability politics and am not eligible for a variety of awards or grants. Given that there are so few publishers willing to take a gamble on a new writer in a market seen as being small and difficult, I gather that this is rather a common source of ire for queer writers.

My queerness also has an impact on my work as a medical writer and journalist. Unless gender is central to the piece I’m writing, I do my utmost to be inclusive or to entirely avoid gendered terms. Instead, I aim to focus on biological facts so as not to exclude people who are trans, genderqueer, and/or intersex, and to avoid heteronormative and cisnormative assumptions.

So, yes, I absolutely think of myself as a queer writer.

The second book in your All Out Vancouver series came out earlier this year. Can you tell us about it? And what made you decide to set those books in a very recognizable Vancouver?

The books in the All Out Vancouver series are, in essence, the books that I wanted to read but that just didn’t exist. There’s a dearth of queer fiction that isn’t about coming out, and I wanted to go beyond that and write about people living their lives, be they bisexual, trans, genderqueer, and/or polyamorous. Thanks to increasing awareness and acceptance, many people now in their late twenties and thirties have been comfortably out for a long time and have been able to build chosen family and repair any rifts they might have had with their families of origin.

There’s a large queer community in Vancouver, which offers wonderful benefits but also some interesting politics to explore. I want to write about the community I know and love, with a dash of intersectionality and politics, but mostly just engaging stories about characters who readers can identify with or recognise in their own lives.

Go Deep is the second novel in the AOV series and was released in April 2016, following Don’t Bang the Barista!, which was released in October 2014. I’ll be sitting down to write the third in the series shortly, with plans to explore some of the newer characters more thoroughly while keeping in touch with the core characters who seem to have won over many readers.

What advice would you give to libraries looking to create meaningful, inclusive LGBTQ+ library collections? Are there any titles that you would consider must-haves?

There are so many fantastic lists now available online of LGBTQ+ books written by authors who themselves identify as LGBTQ+ (including those written by Casey!). I think Autostraddle, the Lesbrary, Book Riot, and other sites are a good starting point, especially for libraries looking for books by queer people of colour and trans folks whose small publishers may not have a large marketing budget.

I’d be happy to see librarians eschew bestseller lists when building collections as these lists are less an indication of what readers like and more a reflection of what straight, white, cis gender critics and publishers deem worthy of promoting. This is especially true for books written about LGBTQ+ folks by people who are straight and cis. While some of these books have literary merit, it’s important that priority is given to LGBTQ+ authors to tell our own stories.

It’s also nice to see libraries taking steps to highlight books that include diverse representations of bisexual characters and trans characters, as well as queer people of colour. The focus is normally so heavily on m/m romance or lesbian ‘chick-lit’ style narratives that it can be hard for other authors and books to find space on the shelves.

Lambda lists can also be helpful, especially now their award categories have expanded to include trans poetry and bisexual fiction.

As for must-have books, that’s a tricky one! Classics like The Colour Purple, Giovanni’s Room, The Well of Loneliness, The Price of Salt, Howl, and Rubyfruit Jungle might be considered essentials. Lesbian pulp fiction, such as by Ann Bannon, and books and plays like Confessions of a Mask, Dhalgren, Funny Boy, Blood Child, and The Normal Heart would help round out a collection. More recently, books by Shani Mootoo, Zoe Whittall, Michelle Tea, Maggie Nelson, David Levithan, and Vivek Shraya help build diversity. It’s so hard to choose!

What about making sure library spaces are LGBTQ+ friendly? What makes a space LGBTQ+ inclusive for you?

One thing I’ve noticed a lot in bookstores and libraries is how LGBTQ+ collections are typically sorted into ‘lesbian’ and ‘gay’ sections, with everything sort of lumped together as if LGBTQ+ is a genre. Having an LGBTQ+ section can be helpful for readers who are deliberately looking for these books, but I also think it essential to include books by or about LGBTQ+ people in general fiction or in the relevant genre sections of a library. This helps to avoid the ghettoization of these books, meaning that they make their way into the hands of new readers. It also helps out those people who might be nervous about standing in front of a giant ‘LGBTQ+’ sign.

On a more obvious note, having a rainbow decal somewhere visible can be very welcoming, and having all-gender washrooms is a must. Librarians themselves play a big part in making a space feel safe and welcoming, of course; educating staff to overcome any heteronormative and cisnormative assumptions about readers’ habits is essential. And, hiring librarians who have a good knowledge of LGBTQ+ books and who read diversely across genres means that it’s more likely readers will have a wider range of books recommended to them.

Not all writers like to do readings or books signings, but making space available to local authors who are LGBTQ+ and who want to hold an event can help, as can making sure to purchase local LGBTQ+ authors’ books. Hosting a queer book club, movie nights where the movie is based on an LGBTQ+ book, and taking part in Pride celebrations, Trans Visibility Day and Bi Awareness Day are also good ways to build community. Even creating a display of relevant books for such events can help library users feel safe and welcome in the space.